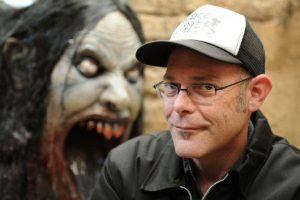 As Creative Director for Universal Studios, John Murdy has been responsible for the creative development of a wide variety of rides, shows, attractions and special events for Universal Studios theme parks worldwide. Most recently, John has served as creative director/producer of Universal Studios Hollywood’s “Halloween Horror Nights,” creating themed “haunted attractions” based on popular horror franchises such as The Walking Dead, Friday the 13th, A Nightmare on Elm Street, Texas Chainsaw Massacre, Saw, Halloween and many others. Halloween Horror Nights was recently voted, “The Best Halloween Event in America” in a national poll by Behind the Thrills.com.

Prior to his work on Halloween Horror Nights, John was the Creative Director for Revenge of the Mummy: The Ride, Universal’s House of Horrors (a walk thru attraction based on Universal’s Horror film legacy, named, “The Best Year Round Haunted Attraction in America” by Hauntworld magazine), Special Effects Stages (an interactive attraction about the art of moviemaking), the re-invention of Universal’s World Famous Studio Tour (which received a TEA Award for Classic Attraction in 2002), The Universal Experience: Behind the Scenes of Universal Pictures (an interactive museum on Universal’s motion picture legacy) and dozens of other rides, shows and attractions.

In addition to John’s role as Creative Director, he has also served as Universal’s on-camera spokesperson/studio historian for programs on The Today Show, Access Hollywood, The Discovery Channel, CNN, The Learning Channel, The Travel Channel, The BBC and a variety of other television programs worldwide. Mr. Murdy has appeared in several film documentaries and featurettes, including His Name Was Jason: 30 Years of Friday the 13th, Saw: Game Over: A Killer Maze, The Shark Is Still Working: The Impact and Legacy of Jaws and The Psycho Legacy. John has also served as a guest lecturer at the prestigious Art Center College of Design and as a motivational speaker for a variety of educational charities in the Los Angeles area.

Prior to Universal, John worked as a Show Writer/Producer for KBD Innovative Arts and was responsible for the creative development of numerous entertainment projects for clients as varied as Elvis Presley Enterprises, Sea World, Time Warner and Walt Disney Imagineering as well as consulting on the motion picture Jurassic Park.

In addition to his themed entertainment credits, Mr. Murdy has an extensive background in theater, film and music. While still in college, Mr. Murdy’s play “The Second Coming” was named one of the top 10 plays in Los Angeles for 1988 by LA Daily News critic Glenn Whipp. As the lead singer/songwriter of Blueroom, Mr. Murdy has performed at many legendary Hollywood venues including the World Famous Whisky-A-Go-Go, The Roxy and the House of Blues.

John was born and raised in Southern California. He began his life long obsession with translating horror movies into themed entertainment experiences at the age of ten, building haunted houses in his parent’s garage. John attended Whittier College, graduating with a Bachelor of Arts degree in Theater Arts in 1989. Mr. Murdy was awarded Young Alumni of the Year by Whittier College in 2003. Mr. Murdy currently resides with his wife Dr. Deirdre Murdy and daughter Isabella Murdy in Whittier, California.