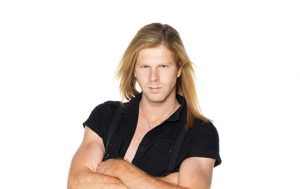 Kyle started in 1997 in the Haunted House  Industry, immersing you in his design elements in over these years with 14 haunted attractions,  3 hayrides including his own fully designed 2 attraction show in 2016, at “The Haunt at Old Town” located in Kissimmee, Florida. Kyle has acted in over 25 haunted attractions, taught acting at 11 attractions, and taught makeup at 20 attractions.

Kyle was discovered by the famous TV show, “Game Show Network,” performed in “Skin Wars” also, which is now featured on “Netflix.”  Kyle was on Season 2 of the completive body painting show, were he won the “Horror Challenge” and was seen in the Final episode. Not only has he won this award but many others including “Ms. Scary Midwest” in 2015, “Monster Make-Up Wars,” “FABAIC” 2015, and was in top 5 for “Dancing with the Stars” Florida edition.

Kyle wanted in the Industry to grow his name and experiences with bigger names. That’s just what he has done, working now full time at “Universal Studios Resorts” Orlando, Florida where he started in 2008. “Halloween Horror Nights” as an airbrush makeup Artist and actor Kyle grew rapidly. He’s played Iconic rolls such as “Pyramid Head” (stilt role,) and even been featured on a bill Board, and Coca-Cola commercials. Kyle is known for these years at Universal as the multitalented skater, stilt walker, and makeup artist.

Kyles pushed the boundaries to new levels in entertainment across not just USA but, even in Mexico. Kyle set off to Mexico as a lead skater for “Aytyde” where he skated as Prince Charming, and Danny Suko. Kyle was the first ever Aerial Ice skater to perform on aerial chains, above Ice. As an Aerialist and, ice skater he has really flew to newer heights.

If this wasn’t enough, Kyle is also known for costume design and has worked as a semester for A-List Artist such as Taylor Swift, Sarah brightman, Katy Perry, Justin Timberlake, Miley Cyrus, and  Justin Bieber where you can see his outfits he made in his 3D Movie.

Kyle loves teaching, currently teaching at Vixen Studio as an aerial instructor. He has taught at conventions, many subjects. He is known as a haunt leader as he teaches every angle of haunted attractions, scenic design to build out, makeup, costuming, and managing. He teaches scare acting but not like the rest. He is teaching the future, and how it is involving for the new age of scaring, with stunt acting to main line acting. He really is changing the industry for a new wave of scares, and thinking out of the ordinary.

Kyles leaving his trace all over the United states with his talent, art, haunted attractions, conventions, art shows, and the night clubs.