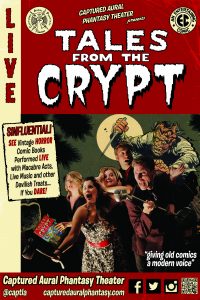 Captured Aural Phantasy Theater presents “Tales from the Crypt” – Live! Before slasher movies and tortured gore there were horror comics and “Tales from the Crypt” led the way with artwork so good and stories so scary that the US Senate nearly shut them down in the early 1950s. Captured Aural Phantasy Theater is the only group in the world authorized to bring these legendary comics to life on stage through its unique, multi-media live performance style.