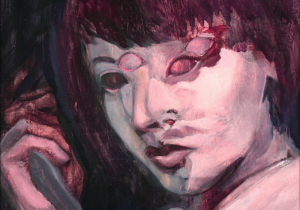 GRYPT is a three piece, Los Angeles based team who moonlight as a band while operating as a horror multimedia group. In the past three years they have produced not only their preceding album, Thy Flesh Consumed (self released), but also two installments of original fiction entitled Tales From a Glass Crypt volumes one and two. The latter is a chapter based serial written and narrated by Romie Romak with foley and score by GRYPT. Each month, the next piece of this gross and unsettling story of family ties and blob creatures is delivered via email to GRYPT Patreon subscribers. GRYPT has also commissioned their musical services to video games and movies. These include Oculus Rift title Body of the Night, the PC Gamer featured Tonight You Die and feminist Horror short film Expecting.

GRYPT is comprised of Horror queen and trans activist Romie Romak, sound designer Taylor Shechet and occult music luminary Myrrh Ka Ba. All three are songwriters and multi-instrumentalists. GRYPT intends to keep the audience gripping their seats in anticipation of whatever they will deliver next. If it is anything reminiscent of Tin Can Tomb (and other modern interpretations of hell), it promises pleasant nightmares.

Saturday, July 29 at 12pm on the Performance Stage.